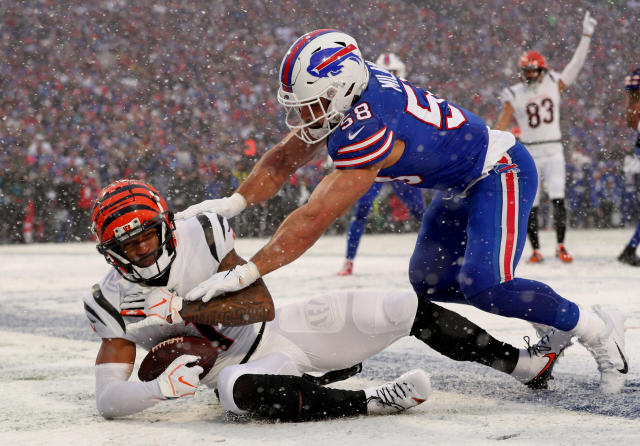 SHREVEPORT, La. – Some of the best players in the past decade of Radiance Technologies Independence Bowl history excelled during the NFL’s Divisional Round, as 17 former Independence Bowl players appeared in the four playoff games this weekend.

Two former Independence Bowl players made the Associated Press All-Pro team – Buffalo Bills linebacker Matt Milano and Denver Broncos safety Justin Simmons. Both on the 2013 Boston College team – Milano was the only first-team selection and continued to show his form in the Divisional Round. After a 10-tackle and two-sack performance during Super Wild Card Weekend, he posted another monster performance in Sunday’s loss to the Cincinnati Bengals – recording 10 combined tackles, two tackles-for-loss, one sack and one pass defended. In two playoff games this season, Milano posted 20 combined tackles, 3.0 sacks, four TFLs and four QB hits.

Defensive Standouts All Over the Field from Bengals vs. Bills

Milano’s Bills teammate and fellow linebacker Tremaine Edmunds was also a tackling machine on Sunday, pulling down 12 Bengals in the game. Edmunds played in the 2015 Independence Bowl for Virginia Tech. Former Miami defensive end and first-round pick in the 2020 NFL Draft, Greg Rousseau, drew his second start of the playoffs for Buffalo and had three solo tackles. On the other side, former NC State standout defensive tackle B.J. Hill continued to start in the middle of the Bengals’ defense. He had three tackles, two QB hits and two passes deflected.

Nine Starters in the Divisional Round with Independence Bowl Ties

Of the 17 players that saw the field during the Divisional Round, nine were in the starting lineup. The Bills led the way with four starters, while the Kansas City Chiefs had three Independence Bowl alumni starting for them. The Giants started Daniel Jones and Jon Feliciano, while Hill started again for Cincinnati.

The thinning of the herd continued this weekend, with the Philadelphia Eagles and San Francisco 49ers moving on to the NFC Championship and the Chiefs and Bengals heading to the AFC Championship. 10 players that played this past weekend are set to play this upcoming Sunday with a Super Bowl trip on the line. The Chiefs lead the way with five former I-Bowl players, while the Eagles and 49ers have two, and the Bengals have one.