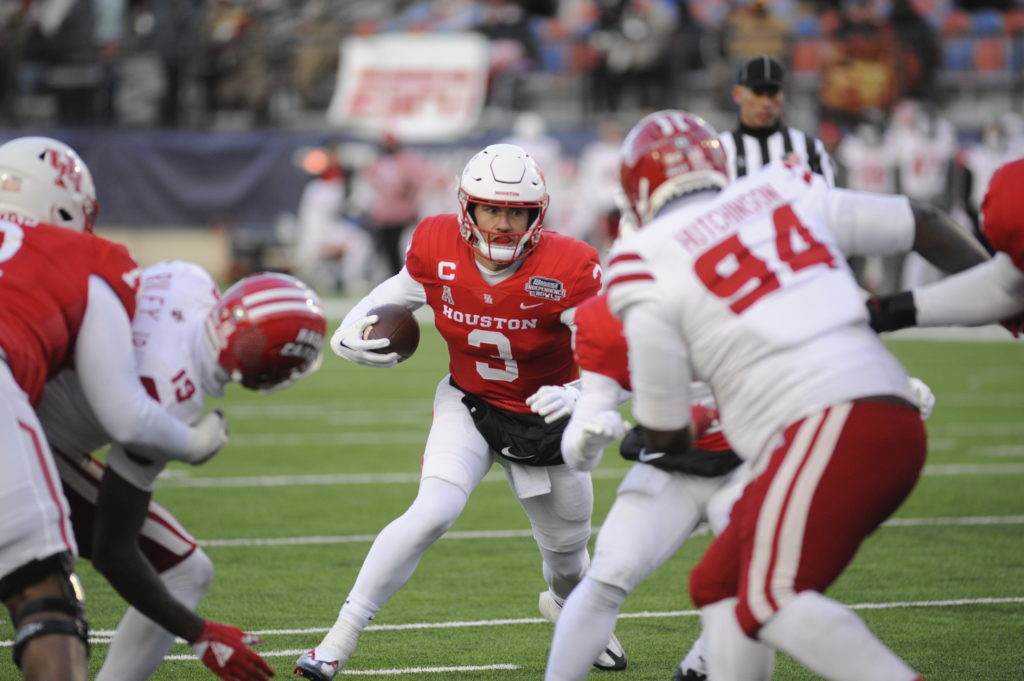 SHREVEPORT, La. (Dec. 23, 2022) – Fittingly for the Houston Cougars, their win in the 2022 Radiance Technologies Independence Bowl came in the final minute.

Clayton Tune’s 12-yard touchdown pass to Nathaniel Dell with 20 seconds to play gave Houston its only lead of the game and the game-winning points in a 23-16 victory over Louisiana on a chilly Friday afternoon at Independence Stadium.

It marked the third time this season the Cougars (8-5) secured a victory with a final-minute touchdown.

“You’re coming off a 12-win season, and you have guys like Tune and Tank (Dell) coming back, expectations are going to get shot through the roof,” Houston coach Dana Holgorsen said. “College football is competitive and hard. There are a lot of good teams. A lot of people are doing the same thing. For us to get our eighth win – and for our seniors to get their 20th win in the last two years – I’m very proud.”

The Cougars’ eighth win looked unlikely to happen through the first 30 minutes as the Ragin’ Cajuns (6-7) built a 13-point halftime lead by dominating time of possession.

Louisiana held the ball for 18:46 in the first half and scored on three of its first four drives, including a 15-play, 75-yard march to open the game.

Quarterback Chandler Fields capped the opening drive, which took 7:21 off the clock, with a 4-yard touchdown pass to tight end Johnny Lumpkin after Fields spun out of trouble in the backfield.

A missed extra point kept the Cajuns’ lead at seven, and it grew to 10 at the half as Almendares nailed his third field goal of the first half with 2 seconds to play.

Those were the final points of the game for Louisiana.

“I don’t know if it was as much them as it was us misfiring,” Desormeaux said of his team’s scoreless second half. “You go from third and inches and we get a 15-yard penalty. You turn the ball over when you get a possession going. More than anything, their offense got going.”

The Cougars shook off the 25-degree weather and 15 mph winds to score on the first drive of the second half, covering 70 yards in 13 plays before Tune and Dell hooked up on a 2-yard touchdown pass.

Although Houston was unable to convert on a pair of second-half fumbles by the Cajuns, including one inside the UH 10 with 6:01 to play in the game, it saved arguably its best drive for when it mattered most.

Tune, the game’s Offensive Most Outstanding Player, led the Cougars on a 92-yard touchdown drive, converting a 1st-and-30 with a 41-yard pass to Carter (3 catches, 104 yards).

Tune, a senior, made his final pass in a Cougar uniform count, finding Dell for the game-winning score that underscored the relationship between the quarterback and receiver.

“That’s exactly the way I would have scripted it,” said Tune, who threw for 216 yards and three touchdowns, becoming the ninth player in I-Bowl history to throw three scoring passes. “I saw the coverage. I saw Tank out there. We had a play called for him, but I saw leverage for a better route. He saw it too.

“I had all the faith in the world he was going to win on the route, catch the ball and get into the end zone. It was an easy decision for me. I put it out there and let him do the rest. I couldn’t be happier with the way it happened.”

Established in 1976, the Radiance Technologies Independence Bowl™ is the nation’s 11th-oldest bowl game, celebrating its 46th edition. The Independence Bowl Foundation announced a one-year extension with Radiance Technologies – ensuring they will be the title sponsor through 2025. The bowl’s conference and team agreements, as well as the television agreement, also run through the 2025 season. Army West Point and BYU are slated to matchup against a rotation of the Pac-12 Conference, American Athletic Conference and Conference USA, which will be televised on an ESPN network.