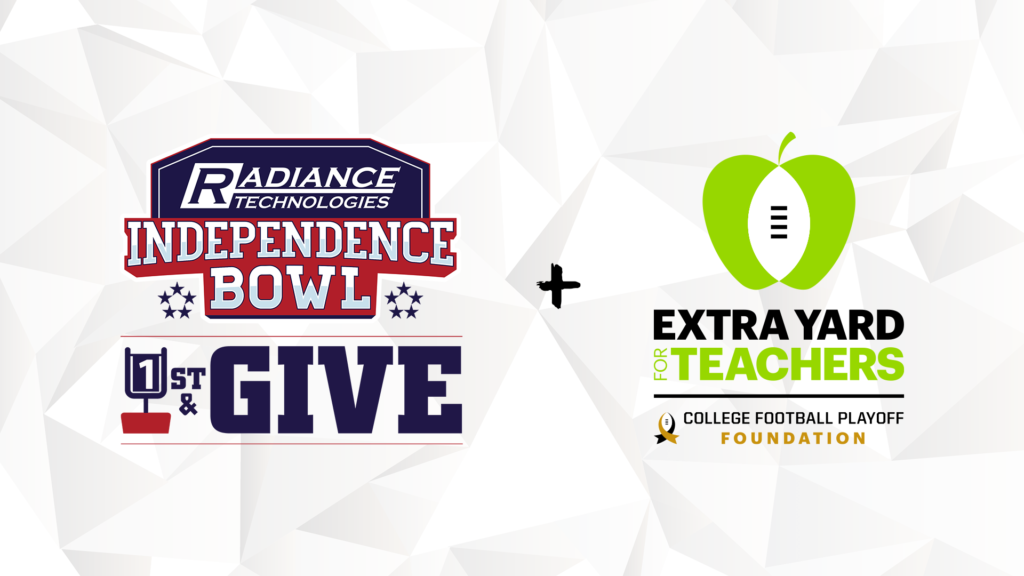 SHREVEPORT, La. (July 19, 2022) – Continuing to support local educators and education initiatives through the Radiance Technologies Independence Bowl’s philanthropic endeavor 1st & Give, the bowl will donate a total of $36,000 to local education and teachers in 2022.

With support from the College Football Playoff Foundation’s Extra Yard for Teachers and a Louisiana Department of Revenue grant, the Radiance Technologies Independence Bowl will donate $26,000 to local teachers through Donors Choose during Extra Yard for Teachers Week (September 17 – September 24) and another $10,000 – $5,000 to one school each from Caddo and Bossier Parishes – during bowl week in December.

“We look forward to once again partnering with Extra Yard for Teachers to fund education-related projects throughout this region of the state, and to continue what we started last year by funding Donors Choose requests of area teachers. We all have a hand in helping to educate the next generation and this is our way of contributing,” said Radiance Technologies Independence Bowl Executive Director Missy Setters. “We also partnered with the Louisiana Department of Revenue through a grant that will allow us to increase the impact our organization will have on education initiatives in 2022.”

In September during Extra Yard for Teachers Week, the Radiance Technologies Independence Bowl will fund $26,000 worth of teachers’ initiatives on DonorsChoose.org. In 2021, the bowl donated a total of over $11,000 to local teachers through Donors Choose and that will more than double this year.

To be eligible for funding from the Independence Bowl, teachers will need to post their initiatives on DonorsChoose.org by Friday, August 19. Educators from Caddo, Bossier, DeSoto, Red River and Webster Parishes are eligible for the funding. Education projects posted on Donors Choose by the deadline will then be evaluated by an independent committee.

On the Extra Yard for Teachers Big Day on Tuesday, September 20, the Independence Bowl will fund the chosen initiatives totaling $26,000 and host a celebration of those teachers and local education. The details of the celebration will be announced at a later date.

Along with funding, each teacher who receives funding from the bowl will receive two game tickets to the 2022 Radiance Technologies Independence Bowl in December, and the teachers will be recognized at the game.

In addition to the $26,000 that will be donated to local teachers, the Radiance Technologies Independence Bowl will also award two schools, one from Caddo Parish and one from Bossier Parish, with $5,000 apiece during bowl week in December.

The schools will be awarded the grand prize based on submissions from each school about a plan or program to promote teacher retention, recruitment or recognition. Schools will be required to submit their projects or programs by Friday, October 28. More details on the guidelines will be announced at a later date. All project submissions will be judged by an independent committee, and the winning schools will be recognized during bowl week.