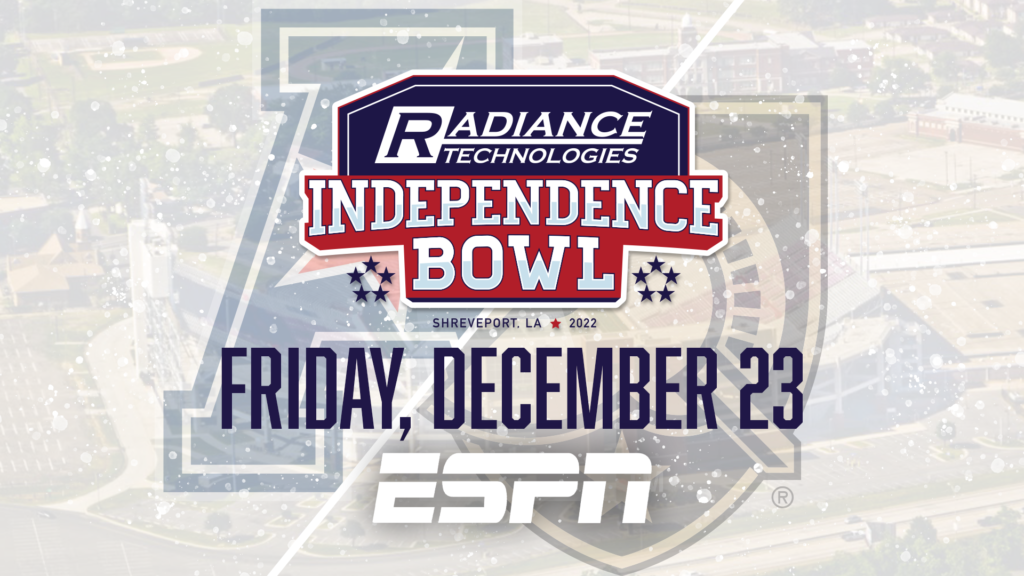 SHREVEPORT, La. (May 26, 2022) – The date for the 46th edition of Shreveport’s annual bowl game is set, as the 2022 Radiance Technologies Independence Bowl will kick off on the afternoon of Friday, December 23 on ESPN. The exact kick-off time of the game will be announced at a later date.

“After a successful 2021, we are looking forward to once again bringing an exciting Radiance Technologies Independence Bowl to Shreveport-Bossier City on Friday, December 23,” said Radiance Technologies Independence Bowl Executive Director Missy Setters. “We believe this game date just prior to Christmas weekend provides the opportunity for both our great local fan base and traveling fans to enjoy not only the game, but all the tremendous bowl week events we host.”

“We are very excited about having another great game date for this year,” noted 2022 Independence Bowl Foundation Chairman Rob Rubel. “With a great date, as well great team and conference partners for this year, we are excited about this year’s potential, and we can’t wait to see our community once again show their annual support to our long-standing bowl game!”

Ticket prices for the 2022 game are the same as in past years, as the three main tiers are:

Endzone Bench and Sideline Bench seats will be available at RadianceTechnologiesIndependenceBowl.com/tickets/, while Sideline Chairback seats will be available to bowl sponsors and qualifying Independence Bowl Foundation Members. For more information on how to become a Foundation member and qualify to purchase Sideline Chairback seats, visit RadianceTechnologiesIndependenceBowl.com/membership/ or call the bowl office.

Group tickets are another ticket option available, and groups who purchase 20-or-more Endzone Bench seats will once again receive half-price tickets at the special rate of $15 apiece.

Another high-end hospitality experience is the North and South Endzone Tent packages. The packages include:

Space is limited for both the North and South Endzone Tent section, and tents can be booked by contacting Radiance Technologies Independence Bowl office at 318.221.0712 or toll-free at 318.221.0712.

For more information on the 2022 Radiance Technologies Independence Bowl, visit RadianceTechnologiesIndependenceBowl.com or follow the bowl on social media @IndyBowl.