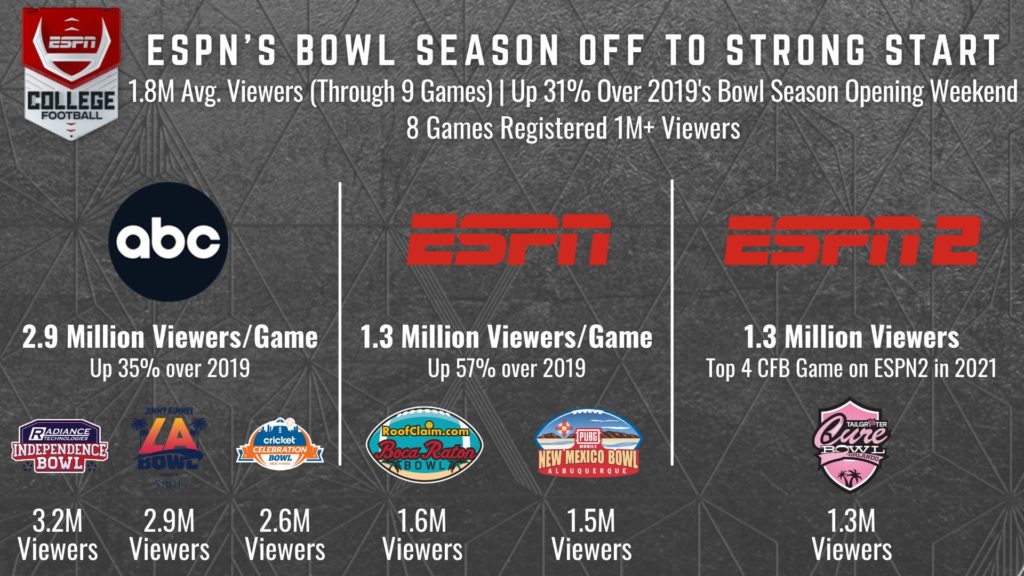 SHREVEPORT, La. (Dec. 21, 2021) – Drawing over 3.37 million viewers on Saturday, December 18 on ABC, the 45th Radiance Technologies Independence Bowl between the UAB Blazers and BYU Cougars topped college football viewership in the first 11 days of Bowl Season. Including the New Years Six bowl games, the Independence Bowl ranked in the top 15 in television viewership.

Per ESPN PR, the 3.37 million viewers on ABC for the 45th Radiance Technologies Independence Bowl made it the most-viewed college football game of the opening weekend. Per ShowBuzzDaily, the Radiance Technologies Independence Bowl was the highest-rated sports program outside of the National Football League (NFL) from December 13-19, outdrawing events including NBA basketball on both ESPN and TNT, college basketball and the PGA TOUR’s PNC Championship.

The thriller, which ended with UAB beating No. 13 BYU 31-28, drew over 20 percent more viewership than the last Independence Bowl in 2019. That game between Louisiana Tech drew a total live audience of 2.77 million, which was up 36 percent from 2018. The 2021 Radiance Technologies Independence Bowl gained over one million more viewers than two games ago in 2018. According to Ryan Brown of NextRoundLive.com and ABC 33/40 in Birmingham, the game drew a 13 rating and 25 share locally on ABC 33/40 in Birmingham.