No. 13 BYU to Take the Field Against UAB in 45th Independence Bowl 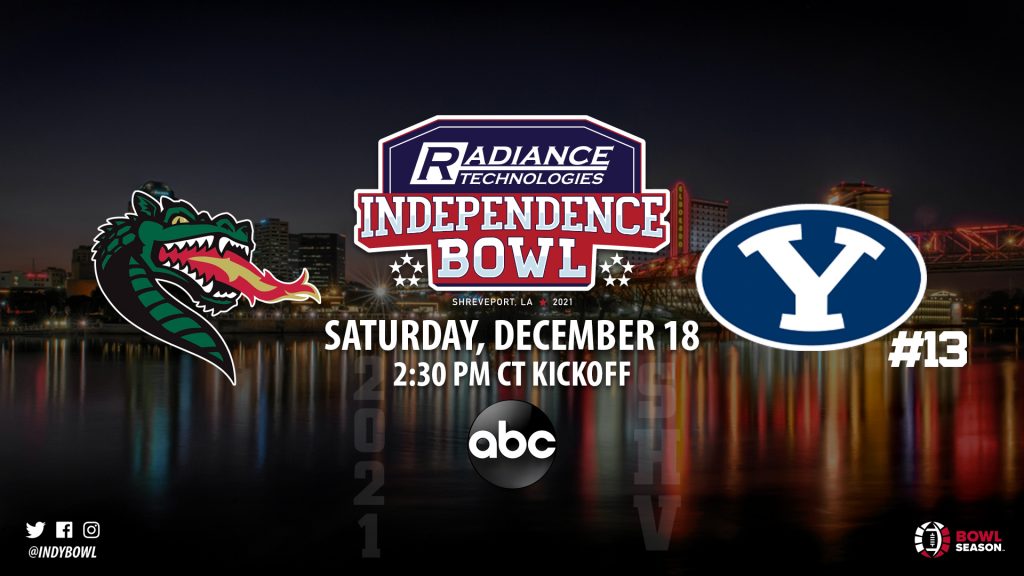 SHREVEPORT, La. (Dec. 5, 2021) – The 45th Radiance Technologies Independence Bowl will kick off on Saturday, December 18 at 2:30 p.m. CST on ABC, and the matchup is set, as the No. 13 BYU Cougars will take on Conference USA’s UAB Blazers in Shreveport.

“Both BYU and UAB have had great seasons this year, and we are excited to have a compelling matchup in Shreveport on Saturday, December 18 on ABC,” said 2021 Radiance Technologies Independence Bowl Chairman Frank Auer. ” Our bowl has a reputation for providing teams with the best experience possible, and we plan on doing the same for BYU and UAB this year.”

Coach Kalani Sitake has led the Cougars to a 10-2 regular season and No. 13 College Football Playoff ranking in 2021, after an 11-1 season and No. 11 final ranking in 2020. It’s the first time BYU has had back-to-back seasons with 10 or more wins since 2008-09.  The Cougars beat six teams from the Power 5 in 2021, including a perfect 5-0 against Pac-12 opponents. BYU also claimed the Beehive Boot in 2021 with in-state victories over Pac-12 champion Utah and Mountain West champion Utah State.

“I want to thank the Radiance Technologies Independence Bowl for this invitation and opportunity to come to Shreveport to face a very good UAB team,” said BYU head coach Kalani Sitake. “UAB is very well-coached and has had a lot of success under the leadership of Bill Clark, who is an exceptional coach. Our team is excited to have one more opportunity to take the field together and build upon what we have already accomplished together this season. We are looking forward to the matchup.”

After BYU had five players selected in the 2021 NFL Draft, including quarterback Zach Wilson going No. 2 overall to the New York Jets, Sitake’s team this year has excelled under the leadership of quarterback Jaren Hall and running back Tyler Allgeier, who has more than 1,400 rushing yards while being tied for the nation’s lead with 20 rushing scores.

BYU will be making its first bowl appearance in the state of Louisiana, and just its third game ever in the Bayou state. The Cougars played in the Superdome against LSU in 2017 and Tulane in 2009. This year’s game will be BYU 39th bowl overall dating back to the 1974 Fiesta Bowl. Among their 39 bowl appearances, the Cougars have played in 20 different bowl games in 12 states. BYU’s 39 postseason bowl invitations ranks tied for No. 20th among college programs — more than storied programs such as UCLA, Notre Dame, Virginia Tech, Wisconsin and Stanford. The Cougars have gone bowling in 16 of the past 17 seasons.

“We are happy to accept the invitation from the Radiance Technologies Independence Bowl and look forward to facing UAB,” said BYU director of athletics Tom Holmoe.  “It has been a phenomenal season for our program. I’m so happy for Kalani, his staff and his players and credit to them for putting together an inspiring 10-2 record in what has been the most challenging schedule in BYU Football history. Let’s win one more and finish strong an already-incredible BYU Football season, and incredible 2021 calendar year for BYU Athletics, and continue to build upon a very bright future entering into the Big 12.”

“We would like to thank Missy Setters and her committee for the opportunity to play against such an outstanding opponent in BYU,” said UAB Associate Vice President and Director of Athletics Mark Ingram. “I also know our fans will appreciate being in a game that is such an easy drive from Birmingham. The Independence Bowl staff has a great reputation for hosting a tremendous event, and we look forward to being a part of it.”

Tickets for the 45th edition of the Radiance Technologies Independence Bowl between No. 13 BYU and UAB are on sale at RadianceTechnologiesIndependenceBowl.com/tickets/. Endzone bench seats are $30, while sideline bench seats are $45. Groups of 20-or-more can purchase tickets for $15 apiece to sit together at the game. Parking is available for pre-purchase on the tickets page. Blue lot passes are $10 if bought in advance of game day, while brown and silver lot passes are $25. Blue lot parking is $15 if purchased on game day.

Established in 1976, the Radiance Technologies Independence Bowl™ is the nation’s 11th-oldest bowl game. The 45th edition will match up No. 13 BYU against UAB on Saturday, December 18, 2021 at 2:30 p.m. CST on ABC. Louisiana Tech recorded the first shutout in the game’s history with a 14-0 victory over Miami in the 44th Independence Bowl in 2019. The Independence Bowl Foundation announced a one-year extension with Radiance Technologies – ensuring they will be the title sponsor through 2025. The bowl’s conference and team agreements, as well as the television agreement, also run through the 2025 season. Army West Point and BYU are slated to matchup against a rotation of the Pac-12 Conference, American Athletic Conference and Conference USA, which will be televised on an ESPN network.