Joseph M. Cosumano, Jr. and Joe Delaney to be Honored at 2021 Independence Bowl

Both Cosumano and Delaney were named the recipients of their respective awards in 2020 but were not able to be honored. Last year marked the 37th year since the passing of Delaney, who wore No. 37 in the NFL for the Kansas City Chiefs.

General Omar N. Bradley was the first recipient of the “Spirit of Independence Award,” and presented it each year until his death, after which his name was added to the award. Since the award’s inception, this honor has been bestowed upon outstanding American citizens, or organizations, which symbolize the spirit of freedom and independence on which the United States of America was founded. Some past recipients include: John Wayne, Bob Hope, Ronald Reagan, and recently, the Tuskegee Airmen, the Berlin Airlift Veterans, Veterans of the Battle of Chosin Reservoir, retired Marine Corporal Jacob P. Schick, Brigadier General Jeannie M. Leavitt and retired Air Force Lieutenant General James M. Kowalski. 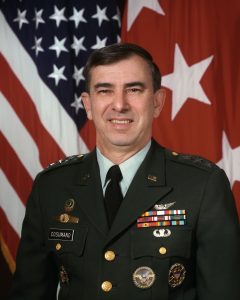 “General Cosumano is one of the greatest patriots I have ever known,” said Radiance Technologies CEO Bill Bailey when the award was announced in 2020. “I watched Joe lead the Army’s Space and Missile Defense Command to accomplish amazing technologies to protect the American citizens. He very much deserves this recognition. He is a Shreveport native that has served our country with honor and distinction.”

“I am honored to have served with and for the men and women of the greatest Military on Earth,” noted LTG Cosumano last year. “I accept this award on their behalf, as it represents all their sacrifices and those of their families to keep America and the world safe!”

“General Cosumano is exactly the type of service-oriented, dedicated, independent-thinking patriot we wish to honor with the Spirit of Independence Award,” remarked 2020 and 2021 Independence Bowl Foundation Chairman Frank Auer. “He is also one of ours. We are so fortunate to have a favorite son who has achieved so much and represented us and our nation so well. We are delighted to present this award in appreciation for General Cosumano’s lasting contributions to our country.” 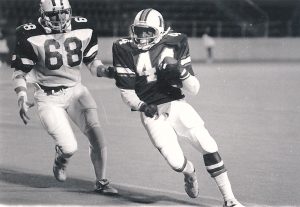 “Joe represents everything the Sportsman of the Year embodies. He was the best athlete I’ve ever seen and carried that to the highest level of his profession. Every time he touched the ball you knew it could be a highlight reel moment,” said 2016 Independence Bowl Foundation Chairman Eric Barkley. “And Joe was an even better person, greatly loved and respected by his teammates. He was confident yet very humble and even in his final moments exhibited his giving spirit.” Barkley was a teammate of Delaney’s during the 1980 season at NSU.

While speaking to current Chairman of the Louisiana Sports Hall of Fame Doug Ireland in 1997, Gary Reasons, a 1996 College Football Hall of Fame inductee and 1980 teammate at NSU, remarked, “Having the opportunity to be a teammate of Joe Delaney at Northwestern for one season gave me the chance to see and learn what people mean when they speak of character.”

Delaney, a Haughton, La. native, was a running back for the Kansas City Chiefs for two seasons from 1981-1982 and was also a two-time All-American at NSU before being drafted in the second round of the 1981 NFL Draft. Delaney tragically passed away on June 29, 1983 at the age of 24 while attempting to rescue three children in a pond in Monroe’s Chennault Park even though Delaney himself could not swim. He was inducted into the Kansas City Chiefs Hall of Fame in 2004 and no player has donned the no. 37 since his passing. In June 2020, a monument was dedicated to Delaney at Chennault Park.

On June 29, 1983, Delaney was at an amusement park in Chennault Park in Monroe, La. when he dove into a pond – despite not knowing how to swim – to save three children. He managed to save one of the three children, but tragically drowned during the rescue attempt.

Delaney’s impact still rings loud to this day. The Delaney 37 Foundation was created in the legacy of Joe Delaney, and the mission of the foundation is to mentor, educate, promote leadership development, teach financial literacy and promote water safety to youth. NSU awards the Joe Delaney Memorial Leadership Award to its permanent team captains each year, and the NSU football spring game is named the “Delaney Bowl.” Along with that, a permanent shrine honoring Delaney sits at NSU Turpin Stadium and his retired no. 44 jersey hangs in the athletics facility.

A monument to honor Delaney’s heroism was unveiled in Monroe’s Chennault Park on June 27, 2020. Joe Delaney Memorial Park also opened to the public on October 29, 2016 in his hometown of Haughton, La.

Tickets for the 45th Radiance Technologies Independence Bowl on Saturday, December 18, 2021 at 2:30 p.m. CST are available now at RadianceTechnologiesIndependenceBowl.com/tickets/. The 2021 matchup is slated to feature the top-15 BYU Cougars against a representative from Conference USA. Tickets start at just $30 for endzone bench seats and are $45 for sideline bench. Call the Radiance Technologies Independence Bowl office at 318.221.0712 or toll-free at 888.414.BOWL for more information.