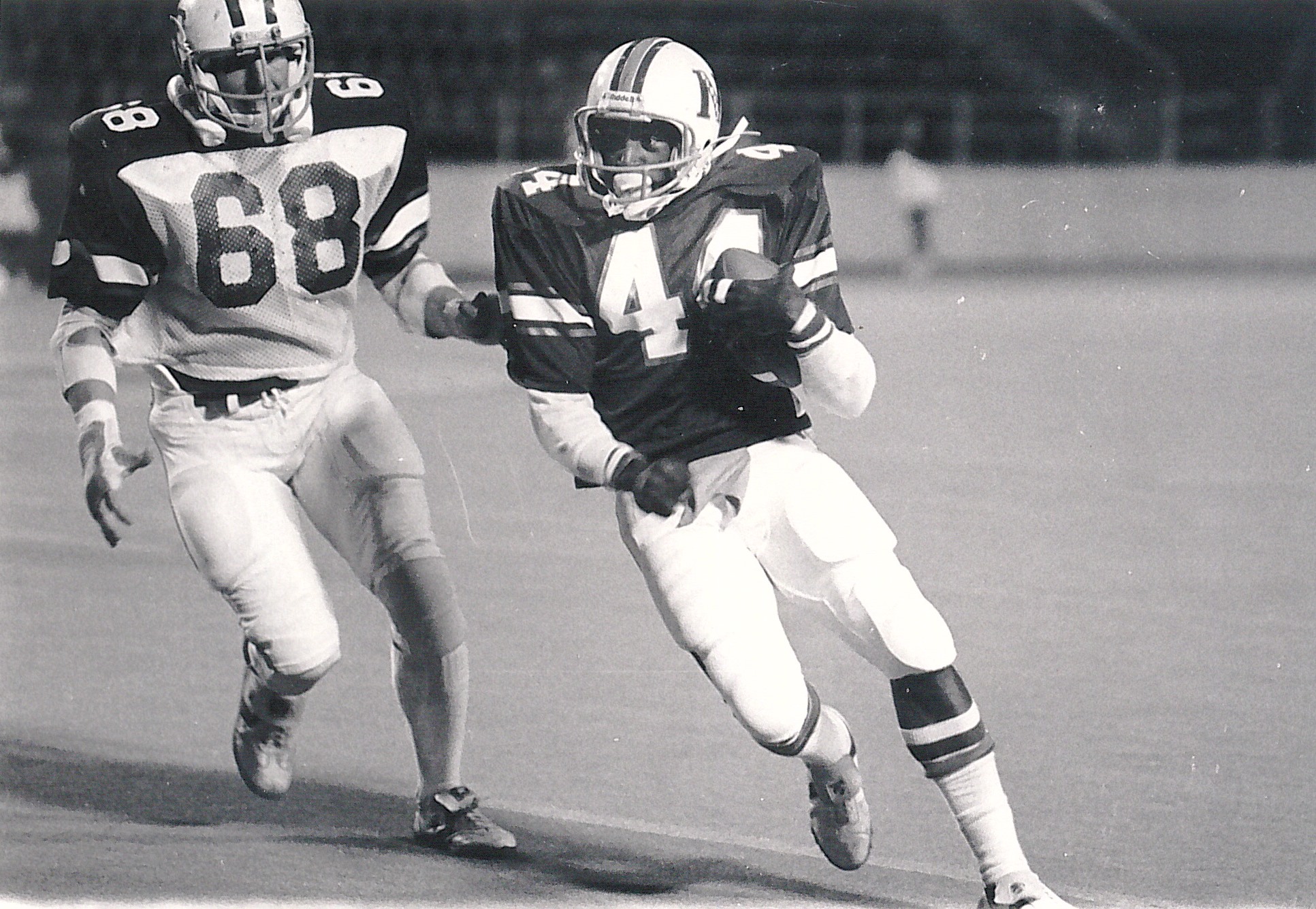 “Joe represents everything the Sportsman of the Year embodies. He was the best athlete I’ve ever seen and carried that to the highest level of his profession. Every time he touched the ball you knew it could be a highlight reel moment,” said 2016 Independence Bowl Foundation Chairman Eric Barkley. “And Joe was an even better person, greatly loved and respected by his teammates. He was confident yet very humble and even in his final moments exhibited his giving spirit.” Barkley was a teammate of Delaney’s during the 1980 season at Northwestern State.

While speaking to current Chairman of the Louisiana Sports Hall of Fame Doug Ireland in 1997, Gary Reasons, a 1996 College Football Hall of Fame inductee and 1980 teammate at NSU, remarked, “Having the opportunity to be a teammate of Joe Delaney at Northwestern for one season gave me the chance to see and learn what people mean when they speak of character.”

Delaney, a Haughton, La. native, was a running back for the Kansas City Chiefs for two seasons from 1981-1982 and was also a two-time All-American at Northwestern State before being drafted in the second round of the 1981 NFL Draft. Delaney tragically passed away on June 29, 1983 at the age of 24 while attempting to rescue three children in a pond in Monroe’s Chennault Park even though Delaney himself could not swim. He was inducted into the Kansas City Chiefs Hall of Fame in 2004 and no player has donned the no. 37 since his passing. This past June, a monument was dedicated to Delaney at Chennault Park.

The path to stardom began at Haughton High School for Delaney, where he played wide receiver and gained attention from multiple division one schools. He ultimately attended Northwestern State from 1977-1980 and became a two-time All-American running back for the Demons. Delaney ranked eighth in the country in all-purpose yards his senior year, and he completed his NSU career with 3,047 rushing yards, 31 touchdowns and 188 points scored. Delaney was elected into the College Football Hall of Fame in 1997. Delaney’s no. 44 was retired in the fall of 1983 following his passing.

Following his tremendous college career, Delaney was selected by the Chiefs in the second round of the 1981 NFL Draft. He enjoyed a record-breaking season in his rookie year in Kansas City, breaking the Chiefs record for most yards in a season (1,121), most yards in a game (193 vs. the Houston Oilers), most consecutive 100-yard games (three) and most 100-yard games in a season (five). Delaney’s rookie season earned him the United Press International (UPI) American Football Conference (AFC) Rookie of the Year Award and earned him a trip to the Pro Bowl.

In his second NFL season, an eye injury and strike-shortened season limited him to just 380 rushing yards. He registered 1,811 all-purpose yards during his career.

On June 29, 1983, Delaney was at an amusement park in Chennault Park in Monroe, La. when he dove into a pond – despite not knowing how to swim – to save three children. He managed to save one of the three children, but tragically drowned during the rescue attempt.

Delaney’s impact still rings loud to this day. The Delaney 37 Foundation was created in the legacy of Joe Delaney, and the mission of the foundation is to mentor, educate, promote leadership development, teach financial literacy and promote water safety to youth. NSU awards the Joe Delaney Memorial Leadership Award to its permanent team captains each year, and the NSU football spring game is named the “Delaney Bowl.” Along with that, a permanent shrine honoring Delaney sits at NSU Turpin Stadium and his retired no. 44 jersey hangs in the athletics facility.

A monument to honor Delaney’s heroism was unveiled in Monroe’s Chennault Park on June 27, 2020. Joe Delaney Memorial Park also opened to the public on October 29, 2016 in his hometown of Haughton, La.

The Radiance Technologies Independence Bowl – college football’s 11th-oldest bowl game – will play its 45th edition on Saturday, December 26, 2020 at 7 p.m. EST/6 p.m. CST at Independence Stadium in Shreveport, La. The game is slated to feature a matchup of Army West Point against a team from the Pac-12 Conference, as the Black Knights accepted their invitation to the bowl on October 24. Louisiana Tech recorded the first shutout in the game’s history with a 14-0 victory over Miami in the 44th Independence Bowl on December 26, 2019. The Independence Bowl Foundation announced a five-year agreement with Radiance Technologies to be the game’s title sponsor on April 21, 2020 and announced new primary agreements in January 2020 that will bring a rotation of Army West Point and BYU to Shreveport to face off against a rotation of the Pac-12 Conference, American Athletic Conference and Conference USA.

Merchandise
Fan Event Tickets
Foundation Event Tickets
Community Event Tickets
Membership Fee
2022 Independence Bowl
Developed by Ruby Shore Software
We use cookies on our website to give you the most relevant experience by remembering your preferences and repeat visits. By clicking “Accept All”, you consent to the use of ALL the cookies. However, you may visit "Cookie Settings" to provide a controlled consent.
Cookie SettingsAccept All
Manage consent