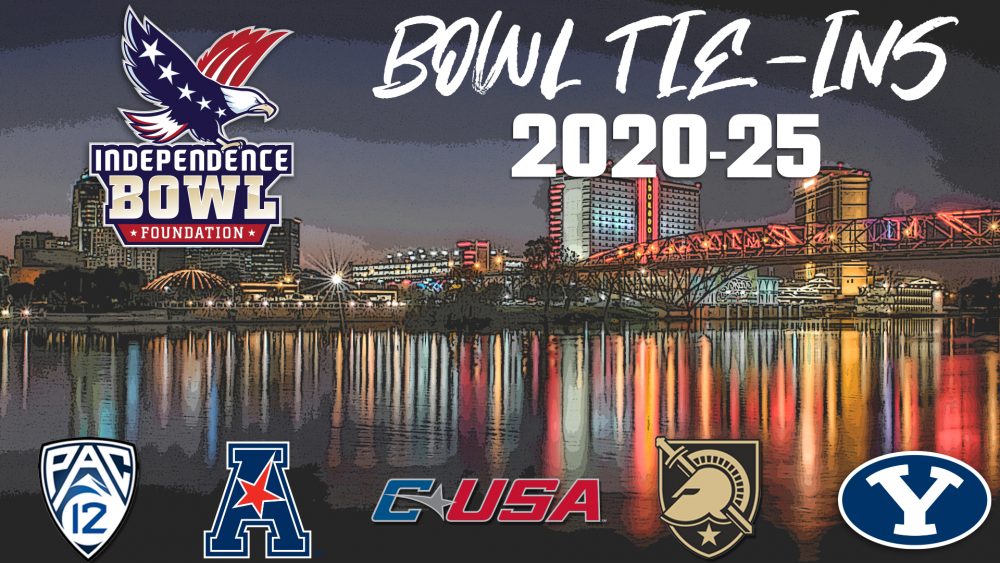 College football’s 11th-oldest bowl game will begin a new chapter in 2020, as the Independence Bowl’s matchups will feature a rotation of the Pac-12 Conference, American Athletic Conference (AAC) and Conference USA (C-USA), as well as nationally respected independent programs Army West Point (Army) and Brigham Young University (BYU) beginning with the 45th Independence Bowl in 2020. The new rotation is a six-year deal that will bring teams to Shreveport from 2020 through 2025.

“I am extremely proud of the Independence Bowl leadership, and we are especially thankful to all of the new partners, as well as our long-time television partner, ESPN, for their help and support in putting together these exciting matchups for 2020-2025,” said Independence Bowl Foundation Chairman Art Carmody IV. “These new agreements will usher in an exciting new era for the Independence Bowl as we head into our 45th year, featuring a mixture of nationally recognized and regionally attractive brands.”

The new matchups represent a changing of the guard for the Independence Bowl, as all three new conferences and two independents have never been represented in the game as primary tie-ins. The rotational matchup will provide a unique variety to each game.

Provided each primary tie-in gains bowl eligibility in the designated season, the matchups for each year from 2020-2025 will be:

The remainder of the Pac-12 bowl lineup, including selection order, will be announced at a later date, as will Conference USA’s future bowl lineup.

As part of BYU’s agreement, the Cougars have an option to potentially participate in the Cheez-It Bowl in Arizona should its conference tie-ins (Big Ten and Big 12) be unable to provide an opponent – an option that can be exercised once during the during the three-year primary agreement with the Independence Bowl from 2020-2025.

“The primary mission of this foundation is to attract and provide quality, nationally recognized football competition geared toward the Ark-La-Tex region, and to enhance economic impact and growth in our communities,” continued Carmody on the 2020-2025 matchups. “We believe this allows us to do just that, through tradition-rich programs and conferences.”