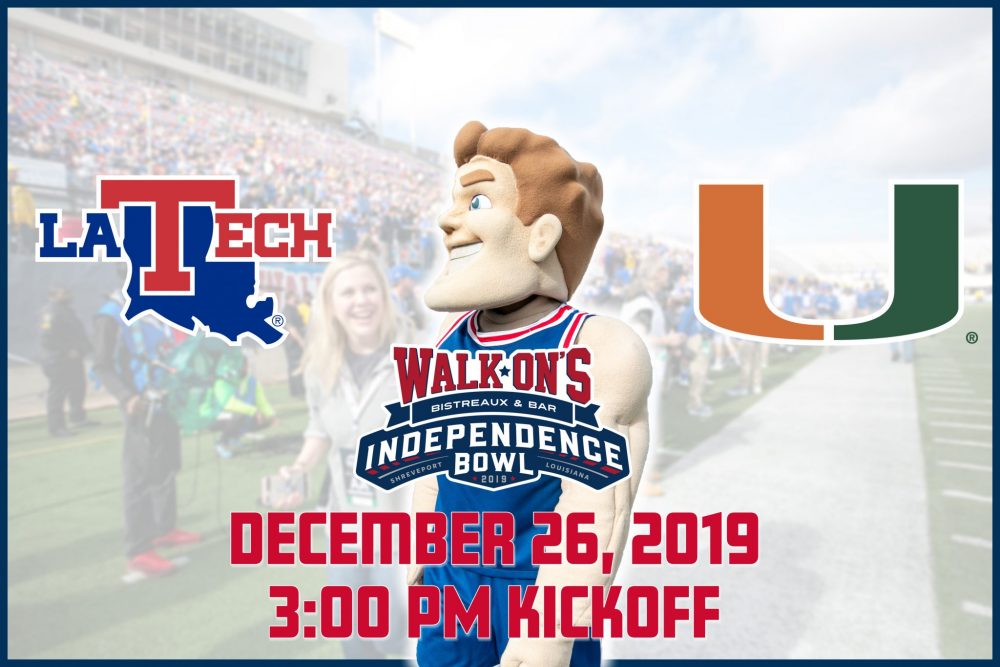 The Walk-On’s Independence Bowl embarks on its 44th game on Thursday, December 26, and the 11th-oldest bowl game in college football will feature the Louisiana Tech Bulldogs of Conference USA (C-USA) and Miami Hurricanes of the Atlantic Coast Conference (ACC).

Louisiana Tech (9-3 overall; 6-2 C-USA), led by seventh-year head coach Skip Holtz, is making its sixth-consecutive bowl appearance and have won each of its previous five bowl games. The Bulldogs have appeared in the Independence Bowl four previous times in the bowl’s 43-year history, with the last appearance being in 2008 against Northern Illinois. Louisiana Tech and Maryland played in the Independence Bowl’s lone tie game in 1990.

Finishing second in the C-USA West due to a tiebreaker, Louisiana Tech’s lone conference losses came to UAB – the C-USA runner-ups and Marshall. Led by senior quarterback J’Mar Smith, the Bulldogs finished second in C-USA in scoring offense – scoring 34 points per game – and first in total offense – averaging 445.2 yards per game.

“We can’t wait to represent Conference USA and Louisiana Tech in the Independence Bowl,” Holtz remarked. “We are facing a great opponent in Miami and have great respect for their coaching staff and players. We are thrilled to be able to play this game in front of so many of our fans and alumni in North Louisiana. We have an opportunity for six straight bowl wins, which would be quite a special achievement for our players and coaching staff. We hope to see everybody in Shreveport on the 26th.”

“We are so excited for the opportunity to play in our home state at this year’s Independence Bowl,” said Tech Director of Athletics Tommy McClelland. “This is a great chance for our fans to support the Bulldogs in their quest for six consecutive bowl wins. We have a strong history at Independence Stadium and are looking forward to returning to Shreveport for another postseason contest. I would like to congratulate head coach Skip Holtz and the rest of the program for a sixth straight postseason appearance.”

Miami (6-6 overall; 4-4 ACC) is led by first-year head coach Manny Diaz and making its second appearance in Shreveport in Independence Bowl history. The Hurricanes, who have won five National Championships in program history, are making their seventh consecutive bowl appearance.

The Hurricanes began the season 6-4, including a victory over Virginia – the ACC runner-up – and finished tied for third in the ACC Coastal. Miami’s defense ranks highly in the ACC – allowing the second-fewest points (20.1) and yards (300.2) per game in the conference.

“We’re looking forward to facing Louisiana Tech in the Walk-On’s Independence Bowl,” head coach Manny Diaz said. “We are working hard to finish strong with this recruiting class before turning our full attention to securing a victory for this team.”

Tickets for the 2019 Walk-On’s Independence Bowl between Louisiana Tech and Miami are available now and are $30 for endzone bench seats, $45 for sideline bench seats and $50 for sideline chairback seats. Group ticket packages are also available for just $15 apiece for groups of 20-or-more. For more information about all the ticket packages for the 2019 Walk-On’s Independence Bowl, visit WalkOnsIndependenceBowl.com/tickets.

The Walk-On’s Independence Bowl’s bowl week and game day will once again be full of events for the public to attend. The schedule of public events is listed below: