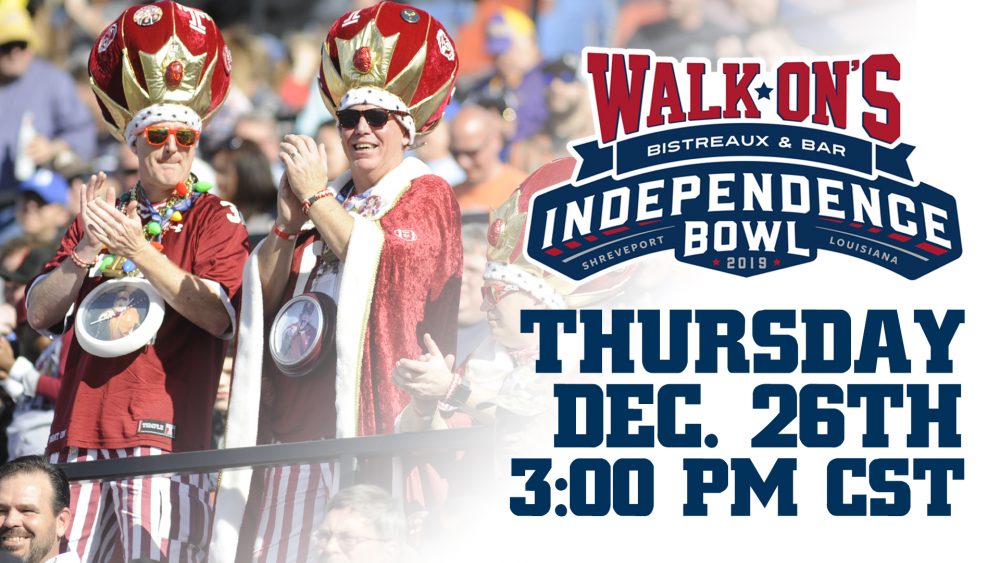 The 11th-oldest college football bowl game is set for the 44th playing of the game, as the 2019 Walk-On’s Independence Bowl is scheduled for Thursday, December 26 at 3:00 p.m. CT.

The 44th-edition of Shreveport-Bossier City’s postseason college football classic pits a primary matchup of teams from the Atlantic Coast Conference (ACC) and Southeastern Conference (SEC). The game also employs secondary agreements with the American Athletic Conference (AAC) and Conference USA (C-USA). Game time for the 2019 Walk-On’s Independence Bowl will be at a later time than the 2017 and 2018 editions of the game, which featured 12:30 p.m. CT kickoffs.

Tickets for the 2019 Walk-On’s Independence Bowl will go on sale at a later date that is yet to be announced. Individual tickets start at $30 for end zone seats and $45 for sideline bench seats, while discounted group ticket packages are also available. For more information and to purchase tickets, fans can call the Walk-On’s Independence Bowl office at (318) 221-0712 or toll free at (888) 414-BOWL, and tickets will also go on sale online at TicketMaster.com at a late date.

UP NEXT – YOUTH FOOTBALL CLINIC

The Independence Bowl Foundation is once again hosting the Youth Football Clinic, marking the 9th year of the event. The clinic is set for Saturday, June 8 from 8-11:30 a.m. at Independence Stadium, and it is free and open for youth from ages five through incoming eighth graders. Participants will receive instruction from regional college coaches, as well as a free t-shirt and lunch. To register, visit WalkOnsIndependenceBowl.com.